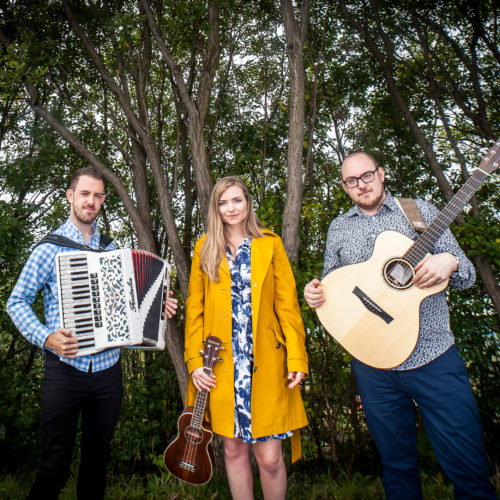 Ron Jappy (Fiddle & Piano) was born and brought up in the small coastal village of Findochty in the North East of Scotland. He began fiddle and violin lessons from a young age in Primary School and it was during this time that he also learned to play the piano. In secondary school, Ron found himself in higher demand for functions and events and subsequently formed a ceilidh band, Cruachan, who still gig to this day. Since moving to Glasgow, Ron has become an accomplished fiddle, guitar and piano player and is currently perusing a variety of musical projects including The Scott Wood Trio and playing with Singer – Songwriter Becca Fox. In 2011, 12 & 13 Ron was one of only 8 finalists to be invited to the prestigious Glenfiddich Fiddle Championship in Blair Castle and received 3rd place in the 2012 competition.

Grant McFarlane (Accordion) is a dynamic young accordionist who performs and teaches extensively around Scotland and further afield. His latest venture with folk ensemble, CherryGrove, has seen him supporting established bands such as Mànran and Breabach and also performing at Olympic Park during the height of the games in 2012. With a passion for writing his own music, Grant is a keen composer and won the Mod Phaislig 2013 tune competition. As a result, his ceilidh band, Scotia, who are widely sought after on the dance band scene, opened and closed the Royal National Mod in his hometown of Paisley. He is also promoting traditional music on an international scale having been part of musical collaborations in France, Germany and the USA and was a finalist in the BBC Young Traditional Musician of the Year 2013.

Claire Hastings is a folksinger/songwriter originally from Dumfries. A graduate of the Scottish Music degree at the Royal Conservatoire of Scotland, Claire is currently living and working in Glasgow. In 2015 Claire won the prestigious BBC Radio Scotland’s Young Traditional Musician of the Year award. Since winning the title she has performed at many high-profile events including BBC Proms in the Park with the Scottish Symphony Orchestra and at BBC Music Day, where she sang alongside Lulu, Jamie Cullum and Deacon Blue. Other performance highlights include singing for the First Minister Nicola Sturgeon in London’s National Theatre, at Orkney Folk Festival supporting Seth Lakeman, at the Scottish Parliament in Edinburgh and playing Nancy (Clarinda) McLehose in ‘A Man’s a Man’ at the Edinburgh Fringe Festival.