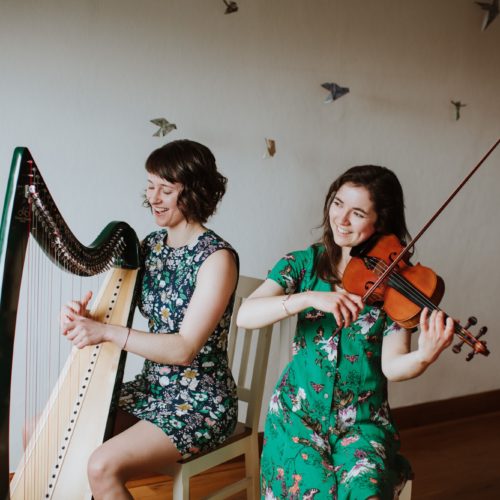 “The playing was mesmerising and the arrangements delightful. The rapport between Lucie and Beccy charming and the setting was an oasis of calm…We came away uplifted, relaxed and feeling we’d been part of something quite special.”

Hailing from the Highlands and Aberdeenshire, Beccy and Lucie met while studying at the Royal Conservatoire of Scotland. After graduating in 2018 from the Masters and Undergraduate programmes in Scottish music, they formed Aves o’ May. The duo began through their shared desire to bring music to communities across the country who often do not get the opportunity to experience live folk music. The pair strongly believe in the therapeutic effect of music and this is their driving force in sharing music that is uplifting, as well as peaceful and joyful. Aves o’ May are excited to be a part of Live Music Now which they joined in 2019.

Beccy began playing fiddle at the age of 8. Her encouraging and inspirational teachers throughout high school led to her studying a degree in classical music at Aberdeen University, graduating with first class honours in 2017, before coming to Glasgow. Performing in various orchestras and string quartets adds to her performance background as well as following a path in traditional music. Beccy also enjoys teaching, working around Glasgow and the Highlands.

From an early age, Lucie developed a passion for traditional music which was then nurtured when she began clàrsach lessons at the age of 8. She went on to spend her final school year at Plockton’s National Centre of Excellence in Traditional Music where she then decided to pursue a career in music. Lucie has since toured both nationally and internationally through ceilidh trails and university. She graduated in 2018 with a first-class degree in traditional music and has since established herself in Glasgow, performing, teaching and composing.