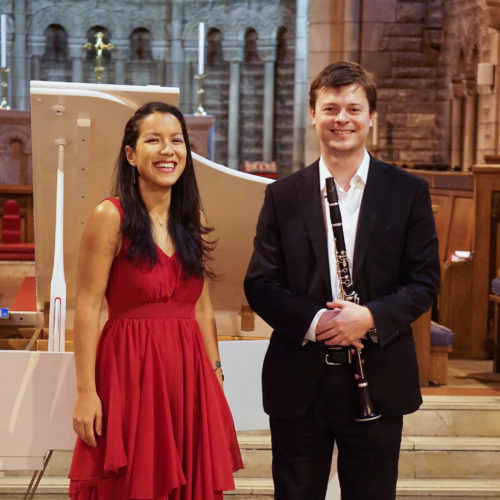 Calum Robertson is a Live Music Now Artist and graduate of the Royal Conservatoire of Scotland, receiving a BMus Honours first class degree in 2011 and a Masters in Performance in 2012 in clarinet, having studied with John Cushing (former Principal RSNO). During those five years he won The Mary D. Adams Prize for Chamber Music, the Classical Concerto Competition and The Governors’ Woodwind Recital Prize.

As part of his studies, Calum performed Carl Nielsen's clarinet concerto with the BBC Scottish Symphony Orchestra and was also interviewed and broadcast Sir James MacMillan's solo work From Galloway on BBC Radio 3. In 2014 he was awarded The Harriet Cohen Memorial Award for young musicians establishing careers resulting in a new commission for clarinet and choir by Claire McCue called Kneeling which he has since recorded with Old Saint Paul’s choir, Edinburgh.

Juliette Philogène is a French pianist born in Mauritius Island. She learned piano under Russian teacher Lilia Poustovoytova, French concertist Désiré N’Kaoua and renowned pianist Jonathan Plowright’s. She was invited to perform Prokofiev’s third Piano Concerto and made her Wigmore Hall debut in 2012. Juliette has been on the prestigious Live Music Now Scotland scheme since 2009 and has performed in festivals, school projects and premiered works written specially for her duo with Fraser Langton (BBC Philharmonic). She has played at the Usher Hall, Wales Millennium Centre, Perth Concert Hall and Glasgow Royal Concert Hall amongst other prestigious venues.

While teaching piano, Juliette also obtained the Masters in Music Therapy with Distinction (MSc) in 2013 and joined the ABRSM board of examiners in early 2018. She joined the Lost Chord Charity Scheme in 2014, providing specialised musical tours for people suffering from dementia. Juliette Philogène delights in performing solo and chamber music recitals. She strives to defend the place of music in everyday education and widen its development."