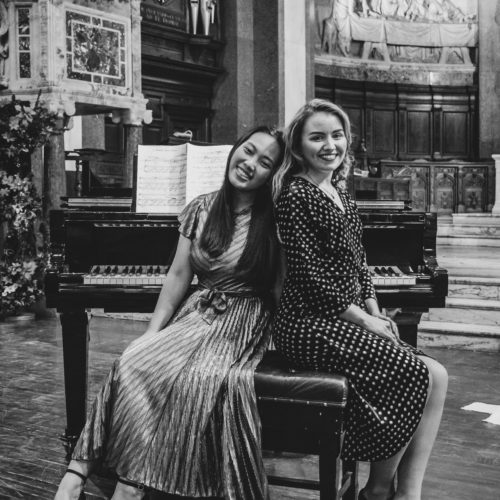 Rebecca Murphy, an Irish Soprano, and Jia Ning Ng, a Singaporean Pianist, first met in 2016, when they were both studying at the Royal Conservatoire of Scotland.

Rebecca, a Masters graduate of the RCS, has taken to the stage with companies including Northern Ireland Opera (as a Studio Artist 2018/19), RSNO, The Belfast Ensemble, Sestina Ensemble, the Irish Baroque Orchestra, and Savonnlinna Oopperajuhlat (where she is currently a member of the Festival Chorus). In 2016, she was a finalist in Northern Ireland Opera’s Festival of Voice Competition. Rebecca has appeared with ensembles including Sestina, Genesis Sixteen, The Kellie Consort, RCS Voices, the BBC Scottish Symphony Orchestra, and Les Sirénes. In addition, she has given a recital at the Blackwater Valley Opera Festival (in association with the Irish Heritage Bursary) after gaining second place in their Wigmore Hall competition 2017. She was also recently invited by BBC Northern Ireland to record a recital as part of their ‘Rosemary Street Young Artist recital series’.

Praised by The Straits Times, Singapore for her “admirable blend of sensitivity and musical understanding”, Jia Ning Ng has recently graduated with First Class Honours in undergraduate studies at the RCS under the tutelage of Jonathan Plowright and Aaron Shorr. Back in Singapore, she was invited to perform at the Victoria Concert Hall and The Esplanade and was awarded the David Marshall Young Artist scholarship to further pursue her craft at School Of The Arts, Singapore. During her studies at the RCS, she has gone on to win several awards in competitions, the most recent being first prize at the annual RCS Concerto Competition where she will be performing with the orchestra in Glasgow City Halls in 2020. Jia Ning is currently continuing her postgraduate studies at the RCS, supported by the RCS Trust and the Craxton Memorial Award Trust.