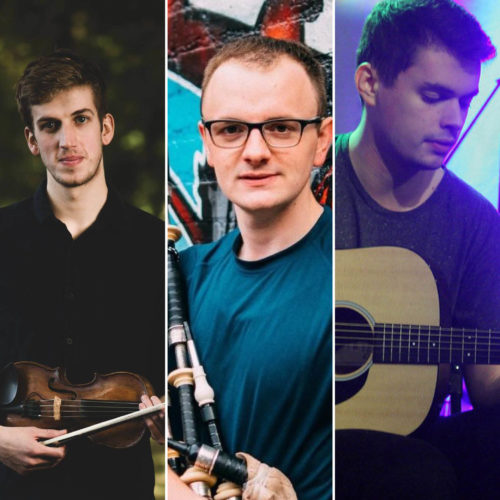 Charlie is a fiddle and bass player from Kinross-shire, currently based in Glasgow.

Charlie has been taught by Elizabeth MacClay, Lauren MacColl and Pete Clark and studied Jazz bass with Mario Caribe, as well as fiddle with Marie Fielding, at the Royal Conservatoire of Scotland.

Charlie won the title of Young Traditional Musician of the Year in 2017, he also won a Danny Kyle award as part of the duo 'Ross Miller and Charlie Stewart', and reached the semi-finals of the BBC Radio 2 Young Folk Awards in 2016 playing with the harpist Becky Hill. Charlie can also be found performing with the bands Dosca, Sketch and Snuffbox as well as other projects in Glasgow and further afield.

Originally from Inverness, Craig Irving began playing the guitar whilst living in Australia in 2009. Upon his return to Scotland, Craig studied music at Lews Castle College, Benbecula in 2012 and the Royal Conservatoire of Scotland from 2013 to 2016.

Craig formed the trio, Talisk, alongside Hayley Keenan and Mohsen Amini in 2014, which won the BBC Radio 2 Young Folk Award. Their debut album, ‘Abyss’, received a nomination for Album of the Year at the 2016 Scots Trad Music Awards.

Craig is also a member of Scottish folk band, Mànran, with whom he has toured internationally, including performances in Australia, Denmark, Germany, Ireland, Switzerland, Spain and Belgium. These extensive performances cultivated in a nomination for Live Act of the Year at the 2016 Scots Trad Music Awards.

Eddie hails from Edinburgh and is a graduate of the Royal Conservatoire of Scotland's BA Scottish Music Degree. He has toured extensively with Barluath as well as frequent tours with guitarist/singer Luc McNally. The duo released their first album in 2017 to great acclaim.

Also an experienced teacher, Eddie, works on the Royal Conservatoire of Scotland's Junior programme and at the National Piping Centre.