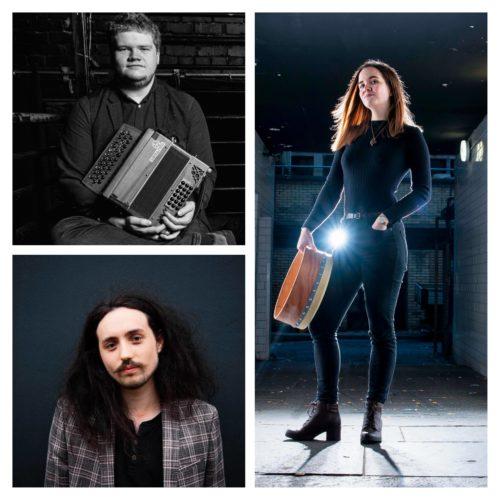 Glasgow based trio Flytt consists of Euan McLaughlin on fiddle/guitar, Lea Søndergaard Larsen on bodhrán, and Sam Mabbett on button accordion. They play a mix of different traditional music, blending their styles to give one coherent, enjoyable, and contemporary expression throughout while staying true to the root of the traditions.

Euan was born and raised in Leith and began playing the fiddle, among other instruments, at the age of five. He has since studied with private teachers, spent six years studying at the City of Edinburgh Music School followed by a spell at the Royal Conservatoire Of Scotland. With his smooth, yet lively musical style, Euan is a very sought-after traditional musician.

Lea has a distinct and creative approach to traditional and folk music. Being Glasgow based, but hailing from Denmark and in possession of a first class honours degree in Irish music, Lea tastefully blends Irish grooves and Nordic sensibility with pumping Scottish energy in her bodhrán playing.

Sam is a button box player who was raised in the south of Oxfordshire but moved to Scotland to study music at the Royal Conservatoire of Scotland in Glasgow. Sam is one of Glasgow's most avid session musicians and he is also part of "up and coming artist of the year"-award winner; The Canny Band.

Together, Sam, Euan, and Lea found inspiration in their different backgrounds to create the name of the trio. They fused two similar words from Scots and Danish both with the same meaning "to move". The Scots "flit" and the Danish "flytte" became "flytt" and with that in mind, the trio hope to move people with their music.