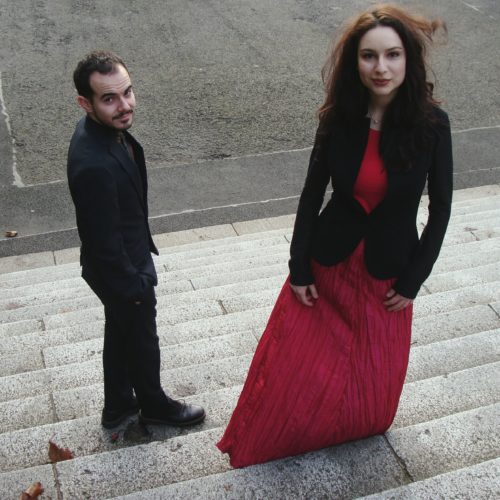 Gelos Duo was formed in 2016 at the Royal Conservatoire of Scotland, where both members were doing their Master of Music Performance programmes. The Duo has worked with renowned musicians such as Arno Bornkamp, Scott Michell, Josef Pacewicz and Aaron Shorr and in 2017 joined Live Music Now scheme.

Gelos Duo combines a wide variety of repertoire for saxophone and piano from early 20th century to contemporaries, but also with a special interest in transcriptions of world famous masterworks.

Rusne-Monika Palsauskaite is a graduate at the Royal Conservatoire of Scotland. She was born in Vilnius, Lithuania and started playing the piano at the age of four. In 2010 Rusne-Monika graduated the National M. K. Ciurlionos Art School in the piano class of A. Siksniute. While still studying at school, Rusne-Monika won various republican and international piano competitions in Lithuania, France, Ukraine, Italy and Russia. During her studies in Glasgow, Rusne-Monika won third prize in the Bamber/Galloway Piano Competition and first price in the Elgar/Spedding Memorial Prize,the competition for the best vocal and piano duet.
As a soloist she has played with the Lithuanian Chamber Orchestra and taken part in masterclasses with G. Szokolay, G. Gruzman, N. Seriogina, L. Simon. O. Mustonen, N. Ogawa, M. Ruzackybe, P. Reich and E. Leonskaja.

Besides solo performances, Rusne enjoys playing in chamber ensembles. She has participated various concerts and festivals in Lithuania, Estonia and Scotland. Currently she is working in Gelos Duo. Since 2017 the duo joined the Live Music Now Scotland scheme.

Spanish saxophonist Francisco Sanchez studied at Conservatorio Superior de Música in Badajoz (Spain) and postgraduate at Royal Conservatoire of Scotland where he won first prizes in the Wind Orchestra Concerto competition (2014), the Governors Recital Prize for Woodwind (2015), Governors Recital Prize for Chamber music (2016) and the Mary D. Adams Prize for Chamber Music (2016). He also gained a Masters of Chamber Music specialised in the saxophone repertoire.

Francisco has been member of ensembles such as Lux Contemporanea, Iberian Big Band and Makaris Quartet and has performed in festivals the Cumnock Tryst Festival (Scotland), Contemporary Music Festival of Badajoz (Spain) and the IV International Festival of Saxophone in Palmela (Portugal). He has performed with the Royal Scottish National Orchestra, BBC Scottish Symphony Orchestra and Amadeus Orchestra among others.