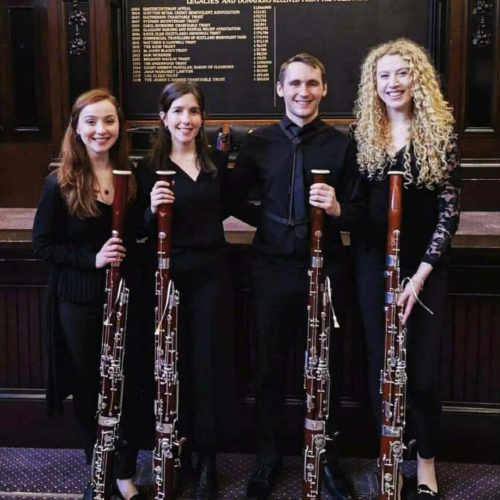 The Genovia Quartet is a dynamic young bassoon ensemble formed of four graduates of the Royal Conservatoire of Scotland. From their first performance together in 2015, this quartet has had a strong musical bond and close friendship which translates into exciting and spirited performances. Their desire to share their fun together with their audiences is obvious and is helping the group establish its reputation both in the UK and abroad.

These four instrumentalists pride themselves on their versatility. Always looking to extend the repertoire for this unique ensemble, they arrange and compose most of their own music. The quartet clearly has four distinctive voices which they often use to represent the different sections of the orchestra, yet they will snap back to a unique blend of sound instantly when required. Putting their own stamp on even the most iconic of works allows the quartet to adapt to suit any occasion - be it traditional concert platforms, educational workshops or corporate social events.

Whilst students at the Conservatoire, the Genovia Quartet were awarded Highly Commended at the Governor's Recital Prize for Chamber Music and subsequently received a highly coveted accolade - the Mary D Adams Prize for achievement in Chamber Music (2017). Notable performance venues include Leeds College of Music, the Merchant's House of Glasgow, Usher Hall (Edinburgh) and multiple performances as part of Glasgow's West End Festival.

In 2018, the Genovia Quartet were invited to perform at the prestigious International Double Reed Society Conference in Granada, Spain. Their recital included premières of some of their own arrangements alongside the Spanish première of 'Pato, Pato!' - a Genovia commission from Italian composer Raffaele de Giacometti.

The Genovia Quartet are part of Live Music Now Scotland and represented by Classical Musicians Scotland.