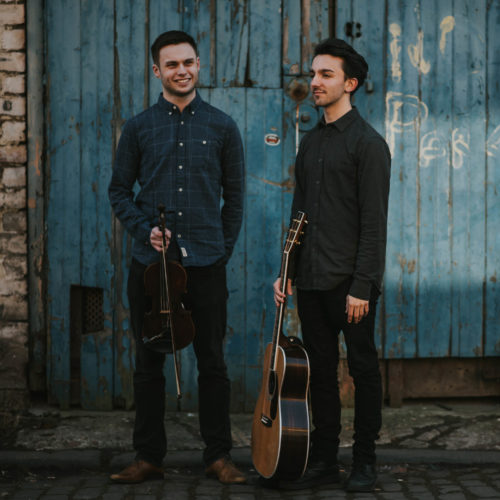 Originally hailing from Orkney, Graham Rorie and Aidan Moodie are the latest in a long line of folk musicians to move South and pursue a career in music.

Their innate blend of fiddle, mandolin, acoustic guitar and voice has matured over the course of more than a decade, between playing in folk bands together in high school and throughout their time studying Traditional Music at the Royal Conservatoire of Scotland.

The two combine lively tunes with sing-along folk songs to create stirring performances tailor-made for their varied audiences. Since joining the Live Music Now roster in 2018, Graham and Aidan have entertained audiences in a range of settings; care homes, ASN schools, ‘Trad Tunes for Tiny Tots’ performances for children, and many more.

Their sets are interwoven with their strong and obvious passion for the traditional music of their native Orkney Islands. In 2018, Graham and Aidan were invited to direct the Orkney Folk Festival’s ‘The Gathering’ series. The resulting show ‘The Gathering - Generations’ went on to headline a sold-out gig in Glasgow’s Old Fruitmarket at Celtic Connections with a 50 strong band of Orcadian talent.

The pair now live and work in Glasgow appearing with a range of different artists including their folk-quartet Gnoss. Aidan, a highly sought after accompanist, can also be seen with Scottish super-group Mànran and Graham has just released his debut solo fiddle project, ‘The Orcadians of Hudson Bay’.
Graham and Aidan joined Live Music Now Scotland in 2018.