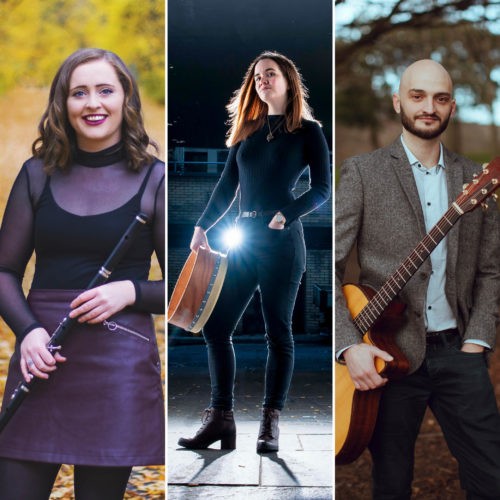 The Dockyard Trio was formed by musicians Sarah Markey (flute/vocals), Lea Larsen Søndergaard (bodhrán) and Jean Damei (guitar) through their shared passion for the multi-faceted traditional music scene in Scotland. All three musicians come from varying backgrounds rooted in traditional music, tastefully blending their own influences of Scottish, Irish, French and Danish styles of traditional music to create their own unique sound and self-penned compositions.

With all three members having been originally based in the Govan/Clydeside area of Glasgow, they share a great passion for community values and the area's history has also influenced the trio's repertoire. The Dockyard Trio were delighted to join Live Music Now Scotland in 2019. Since then their highlights have been hosting workshops with Fairview ASN School in Perth, as well as performing on numerous occasions in the National Museum of Scotland as part of the 2019 International Edinburgh Fringe festival and the museum's 2019 Hogmanay family ceilidh event.

The Dockyard Trio have performed a number of Scottish folk songs including Jamie Foyers by Ewan MacColl and the Spark Among the Heather by Jim Reid. In addition they regularly perform a vast repertoire of Irish and Scottish traditional tunes. With younger audiences the trio have also performed children's songs in Scots such as Three Craws and Daphne Cochrane.