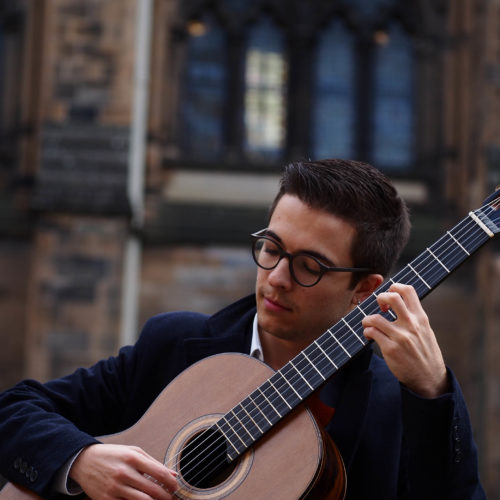 Jacopo Lazzaretti is a versatile and exciting guitarist from Rome, currently based in Glasgow. He graduated from the Conservatoire of Santa Cecilia in Rome with a First Class Bachelor Degree in Music with Honours in 2017 and completed a Masters Degree in Performance at the Royal Conservatoire of Scotland in June 2019. During his studies, Jacopo performed in many masterclasses with some of the world’s most well-known guitarists, and he has been strongly inspired by musicians such as Arturo Tallini, Giulio Tampalini, Matthew McAllister, Allan Neave and Pavel Steidl.

His musical activity to date presents him not only as a driven performer in competitions, having won several National and International prizes, but also as a concert artist, playing music that shows the guitar in all its facets of time and style. So far, he has delighted audiences giving recitals in Italy as well as abroad in Istanbul and Scotland. Since 2018, he has been a solo artist for Live Music Now Scotland, through which he has had the opportunity to perform in many Scottish care homes, as well as at the Scottish National Galleries, the National Portrait Gallery and the Usher Hall in Edinburgh.

Another important aspect of his musical life is his passion for Chamber Music. Jacopo also gives recitals with his partner Kerry Lynch, a flautist, who together are known as the JKL Duo.