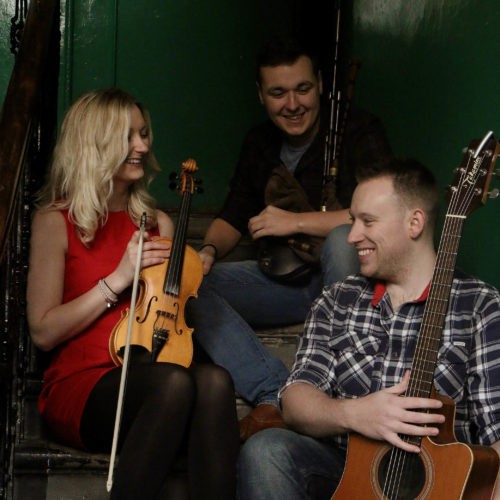 Kilda brings together some of the finest young musicians and together they have created a lively and energetic sound combining tunes and songs from their Scottish roots. Collectively Kilda consists of two BBC Young Traditional Musician of the Year Finalists, a winner of the BBC Radio 2 Folk Awards and have also toured with Manran, Red Hot Chilli Pipers, Scott Wood Band, Norrie MacIver Band and Fat-Suit.

Norrie MacIver
Norrie "Tago" MacIver is a singer/songwriter from Carloway in the Isle of Lewis. From 2005 to 2011 Norrie was the lead singer of the award-winning band, Bodega, who in 2006 won the BBC Radio 2 Young Folk Award. This allowed the band to play at some of the biggest festivals in the UK including Cambridge Folk Festival. Bodega also went on to win Folk band of the Year at the MG Alba Scot Trad Music awards in 2008.

He is now the lead singer of the award-winning Gaelic Rock band, Manran, who made a name for themselves by releasing the single ‘Latha Math’, which was written by Norrie himself. Since the age of 18, Norrie has been touring all over the world and has appeared as a guest singer on albums for artists such as Julie Fowlis and Daimh. 2011 saw Norrie voted Gaelic singer of the Year at the MG Alba Scot Trad Music awards. He grew up with many different styles of music and he brings all those styles together in his band, Norrie MacIver band. In 2014 Norrie Released his debut Album, ‘Danns an Rathaid’, on his own label.

“The Gaelic cross-over voice of his generation. Norrie is a singer of range, clarity and melody, and although firmly rooted in Gaelic tradition, he has a voice completely at ease with a backbeat, effortlessly exploring rhythm and modern idioms.” - Calum MacDonald, Runrig

Scott Wood
Born and raised in Erskine, Scott began piping at the age of 12 through the local Boys Brigade Pipe Band. He has been taught by some of the world’s greatest pipers including Gordon McCready, Finlay MacDonald, Stuart Samson and Allan MacDonald, and graduated with a degree in Scottish Music from the Royal Conservatoire of Scotland. Scott has played at the top of the Grade 1 with the Strathclyde Police Pipe Band and was both in Pipe Major and Pipe Sergeant roles in the National Youth Pipe Band of Scotland scheme. Throughout his younger days he won many competitions around Junior Solo Circuit, including Overall Champion at the National Piping Centre Competition, and a Gold Medal at the Cowal Highland Gathering. Scott left competitive piping to focus on his passion of performance within the Scottish music scene, and in 2013 was a finalist in the prestigious BBC Radio Scotland Young Traditional Musician of the Year competition.

He is currently a member of the world-renowned Red Hot Chilli Pipers as well as having toured extensively around Europe, America, Australia and South America with Scottish Bands Mànran and Rura. He has also made appearances with artists such as: Old Blind Dogs, Carlos Nunez, The Mischa MacPherson Trio, Phil Cunningham and Skerryvore.

Mhairi Marwick
Having grown up at Cowfords Farm, Fochabers, Mhairi was brought up playing music from a young age. She was inspired by her fiddle teacher, James Alexander MBE, who was and still is a great influence and inspiration. She has also been taught by some of the best fiddle players in Scotland including Marie Fielding and Alastair McCulloch. She graduated from Strathclyde University, BA Applied Music in 2013 with a First-Class honours degree.

Mhairi was a finalist in the BBC Radio Scotland’s Young Traditional Musician of the Year 2014 and this gave her a platform in the Scottish Music Scene.