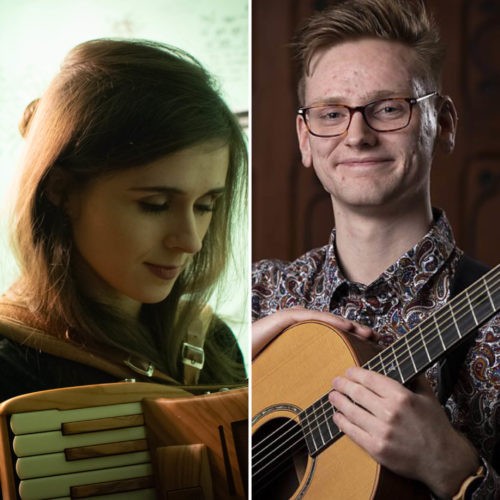 Up and coming musicians Calum McIlroy and Megan MacDonald are two of the most active artists within the Scottish traditional music scene. On mandolin, guitar, and vocals, Calum demonstrates his intricate flat-picking and distinct skill in composition of lyrical melodies and narrative song. He was a finalist in the 2020 BBC Radio Scotland Young Traditional Musician competition and gained his Honours Degree in Traditional Music from the Royal Conservatoire of Scotland, and is seen performing nationwide with his own trio (which Megan also features in).

Megan’s North Highland background has contributed to a style rooted in Scottish traditional music, with subtle contemporary influences on the piano accordion. Her diverse repertoire from Scottish and world traditions, combined with sensitive and assured playing has seen her much in demand as a band member, session musician, and tutor in Scotland's traditional music scene, and is seen regularly touring with bands HEISK and Eabhal. Together, Megan and Calum collaborate to create a lively yet sensitively arranged set of tunes and song. Mehan and Calum joined Live Music Now Scotland in 2020.