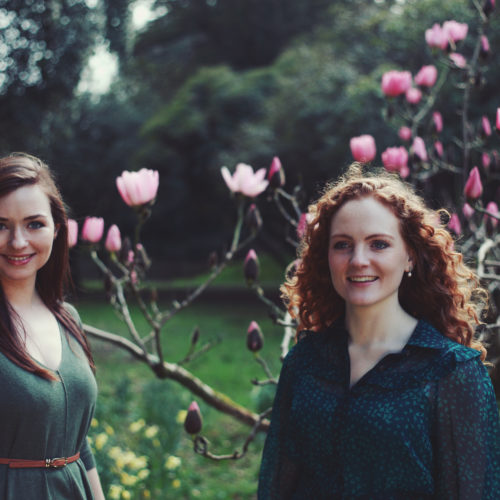 Scots singers Robyn Stapleton and Claire Hastings met as students at the Royal Conservatoire of Scotland. Both from Dumfries & Galloway and with a shared passion for traditional song, they formed vocal duo Robyn & Claire. They were accepted to work with Live Music Now in 2013, and have since gone on to perform together throughout Scotland and at prestigious festivals including Celtic Connections.

In 2014, Robyn won the prestigious BBC Radio Scotland Young Traditional Musician of the Year award. Claire won the same award in 2015, becoming the second Scots singer in a row to claim the title. There have been some incredible highlights for both Robyn and Claire over the past two years, who are fast becoming two of Scotland’s leading folk singers. Performances include singing at BBC Proms in the Park accompanied by the BBC Scottish Symphony Orchestra, and sharing the stage with Katherine Jenkins and Lulu.

As well as performing, Robyn and Claire enjoy teaching and passing on their knowledge of traditional music. Robyn is regularly invited to lead singing workshops at festivals, schools and community choirs throughout Scotland and last year was named an Ambassador of the Scots Language (Education Scotland). Claire is currently training to become a Colourstrings teacher for early years music, and also works with Fèis Rois on their Youth Music Initiative Programme in primary schools throughout Dumfries and Galloway.

As well as performing as a solo artist, Claire is also a member of Top Floor Taivers, who will be releasing their debut album later this year. Robyn's recent collaborations include The Macmath Collective featuring Emily Smith and Aaron Jones, and performances with Scottish Ensemble.

In summer 2015, Robyn released her debut album ‘Fickle Fortune’ to great acclaim, with one of her songs featuring on BBC’s Desert Island Disks.

Claire released her debut album ‘Between River and Railway’ in 2016, which features traditional and contemporary folksongs alongside her own self-penned songs.