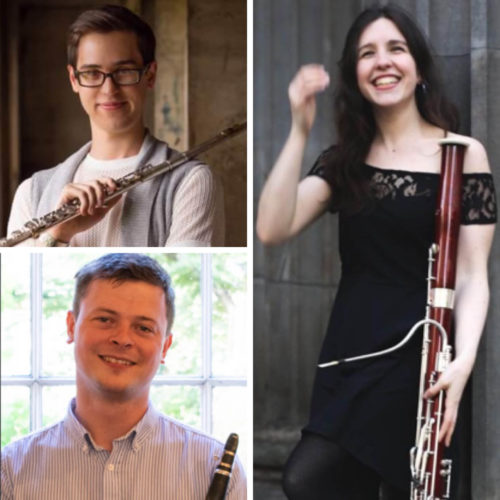 Sirocco Winds are a dynamic wind ensemble comprising of Masters graduates of the Royal Conservatoire of Scotland. Although based in Glasgow, its members come from all over the UK and Spain. They were formed in 2012 and Sirocco Winds are represented by Classical Musicians Scotland. Successes for the group include winning the Governors' Recital Prize for Chamber Music at the RCS, playing live on Classic FM, BBC Radio 3 and BBC Radio Scotland, entertaining guests on the National Trust for Scotland’s cruises in 2017 and 2018, and performing in prestigious music festivals including the St Magnus International Festival, the Cumnock Tryst and Aberdeen International Youth Festival.

They work as both a wind quintet and a wind trio (flute, clarinet and bassoon). As a wind trio, they were recently chosen as semi-finalists for the Royal Overseas League Chamber Competition and perform with Live Music Now Scotland whose work includes carrying out educational workshops such as specialist sessions at Donaldson’s School for hard of hearing children and the Royal Blind School, Edinburgh.