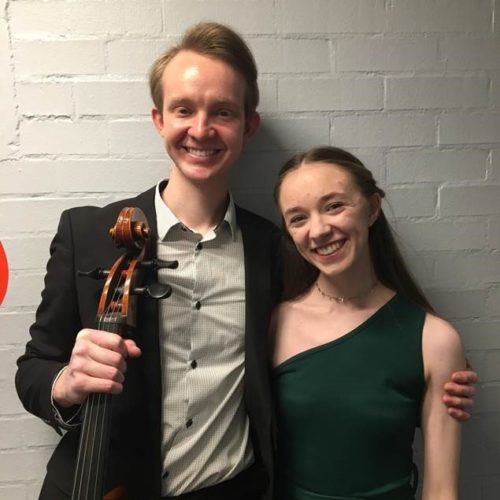 When working on a community music project at RCS in 2019, pianist Catriona met cellist Josiah Duhlstine. They continued to perform together as the Phoenix Duo.
Josiah grew up in Phoenix, Arizona, where he was highly involved with his local youth symphonies as well as a folk music ensemble. He relocated to Glasgow in 2018.
Catriona Mackenzie is a pianist from the Highlands. She studied with James Willshire at St Mary's Music School in Edinburgh, and continues to study with him at RCS in her final year of undergraduate studies.
Josiah won the American String Teachers Association Composition Competition in 2021 for a composition he composed. Catriona has collaborated with the RCS on a performance of Saint-Saens' Carnival of the Animals, presented a new composition for the "PLUG" festival, and won the Louis Carus Duo Ensemble Prize.
Josiah and Catriona first collaborated as part of a larger ensemble at the Marie Curie Hospice, and they've since continued to explore the rich classical cello-piano repertoire as well as developing arrangements of Scottish and American traditional music. The Phoenix Duo are thrilled to be a part of Live Music Now Scotland and to share their music with a wide range of people.