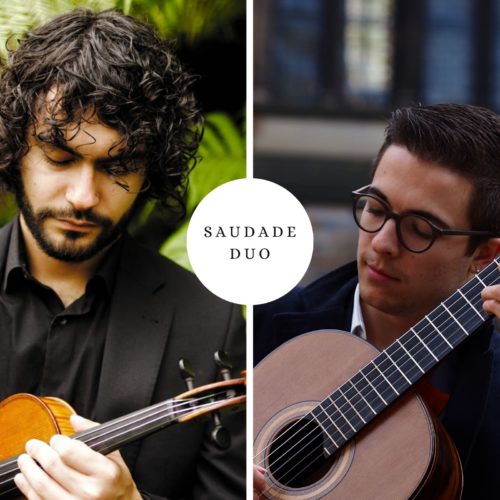 Eddy Betancourt is a virtuoso violinist from Cuba, currently based in Glasgow. He graduated from the Conservatory of Vigo (Spain), the University of Aveiro (Portugal), the Conservatorium Van Amsterdam and the Royal Conservatoire of Scotland. During this period of intense education, he had the opportunity to study under the guidance of Andrea Gajic, Roberto Valdés, Ilya Grubert, Francesco Belli, Cristóbal Soler, Walter Themel, Rafael Montes, Jean- Marc Burfin, Jean-Sébastien Béreau, Mikhail Bezverkhny, José Francisco del Castillo, Jela Spitkova and Adrian Pinzaru.

Jacopo Lazzaretti is a versatile and exciting guitarist from Rome, currently based in Glasgow. He graduated from the Conservatoire of Santa Cecilia in Rome in 2017 and completed the Master’s Degree in Performance at the Royal Conservatoire of Scotland in June 2019. Jacopo has performed in many masterclasses with some of the world’s most well-known guitarists and he has been strongly inspired by musicians such as Arturo Tallini, Giulio Tampalini, Matthew McAllister, Allan Neave and Pavel Steidl.

Jacopo and Eddy are very excited to be working together as part of Live Music Now Scotland and they can’t wait to bring their music to you.