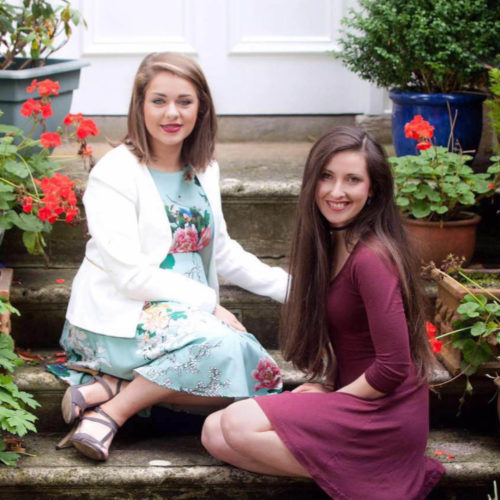 Voice and Verse are a fun-infused voice and piano duo who present their audiences with a unique blend of vitality and sensitivity. Laura McFall (soprano) and Kristine Donnan (piano) met and read music together at the University of Ulster and both also held choral scholarships in Christ Church, Derry and continued their studies at the Royal Conservatoire of Scotland. While Laura is off gallivanting on stage with NI Opera and over-exciting children with her Kodaly workshops, Kristine leads a lonelier life behind the organ and piano; further fuelling her madness with composing. Voice and Verse aim to inspire audiences with classical music in it's raw beauty without formalities and pretensions. The duo also enjoy performing popular classics from Jazz standards and Folk and never without cheeky interpretation!

Laura is a young, passionate and enthusiastic opera singer and has immersed herself in many vocal ensembles and projects. Since 2012 Laura has been working and touring with NI Opera on a number of different productions. As well as working in the seasonal operas, Laura also works regularly as a promotional singer for NI Opera from by giving public performances in shopping centres, theatres and department stores. Laura was heavily involved with Derry's City of Culture year; one notable highlight was her role as soloist for a new music concert held in Christ Church Derry, were she performed new pieces by local composers Sean Doherty and Colin Norby. As well as giving her own recitals, Laura, along with Kristine, her pianist in crime, brings her singing to local coffee shops and restaurants.

Laura is member of early music group Sestina and performed in their recent production of King Arthur. As well as being guest soloist in local choral concerts, Laura has also given solo performances and is an active member of the University of Ulster Choir and a choral scholar of Christ Church, Derry.

Laura works regularly with NI Opera’s educational outreach program, delivering fun, opera-flavoured workshops for members of the community. Laura's community involvement further extends to her Kodàly workshops in which she established and manages herself; named ‘Do-Re-Music’.

Kristine graduated with a first class honours degree, specialising in piano, composition and musicology, and she currently works as a freelance composer and arranger, working closely in particular with the Playhouse, Derry, where she is also resident pianist. She is also an accomplished organist and percussionist; playing with local popular artists and is the assistant organist of Christ Church, Derry. In 2014 she attained first place in the Derry Feis for the award of organ performance as well as the William West Memorial Award for best interpretation of a piece of classical music. Kristine was awarded the Individual Artist Award from City of Culture in 2013 and was nominated for the ESME Arts award in 2014. She is also a keen harpsichordist, playing for the University of Ulster Baroque Ensemble, which she is the assistant conductor of, as well as providing arrangements and performing editions for the ensemble. Kristine is a deeply enthusiastic accompanist and is in regular demand in Northern Ireland.