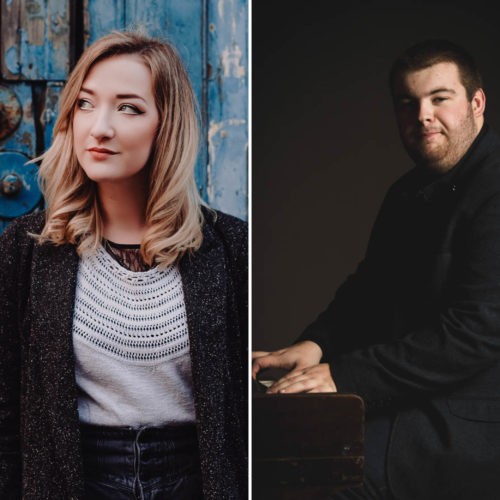 Iona Fyfe and Rory Matheson are a piano and song duo, who met during their studies at The Royal Conservatoire of Scotland. Their repertoire spans lively piano-led tune sets, country classics and traditional ballads from Aberdeenshire to Appalachia. Iona and Rory collaborated together on Iona’s 2019 EP, Dark Turn of Mind, which received airplay on stations such as BBC Radio 2 and BBC Radio Scotland and was described as “an honest, compelling, and technically perfect performance” by Folk Radio UK.

Aberdeenshire singer, Iona Fyfe, has become one of Scotland’s finest young folk singers, rooted deeply in the singing traditions of the North East of Scotland. The youngest ever winner of Scots Singer of the Year at the MG ALBA Scots Trad Music Awards 2018, Iona has been described as “one of the best Scotland has to offer.” (Global-Music.de). Iona is a fierce advocate for the official recognition of the Scots Language and is a fine exponent of the Doric dialect, winning the title of Performer of the Year at the Scots Language Awards in 2020. Iona led a successful campaign to pressure Spotify to recognise Scots and add it to its list of languages. She was a finalist in the BBC Radio Scotland Young Traditional Musician of the Year 2021 award and has performed with the BBC Scottish Symphony Orchestra as part of the World Premiere of Disney Pixar’s Brave in Concert at Glasgow Royal Concert Hall. Iona mainly performs with her trio, and has visited several countries including Australia, Canada, the USA, Germany, Poland, France and Austria. Iona joined Live Music Now in 2019 with the hope to connect with local communities of audiences of all ages and backgrounds through her music.

Rory Matheson hails from Sutherland, on the North West coast of Scotland. Growing up playing the accordion, he changed his hand to the piano during high-school and found a passion for accompanying. Rory’s style is heavily influenced by the music of the highlands and Islands; however, elements of jazz and blues have also influenced his approach to traditional music, creating a powerful and sympathetic rhythm player. Rory moved to Glasgow to pursue a degree in Traditional Music at the Royal Conservatoire of Scotland and has performed extensively as part of TRIP, a Glasgow based band whose music spans four corners of the Celtic diaspora. Rory was a finalist in the BBC Radio Scotland Young Traditional Music of the Year 2018 and has participated in several broadcasts for BBC Radio Scotland Take the Floor.