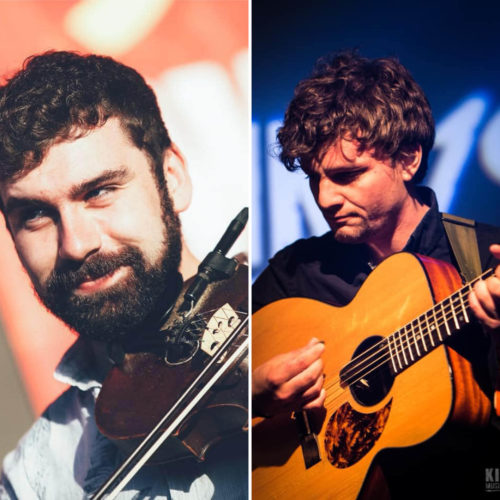 Jamie and Nicky met whilst studying Gaelic music on Uist in the Outer Hebrides. Jamie MacDonald is a native of the Isle of Tiree and has grown up immersed in the music and culture of the island. Fluent in Gàidhlig, Jamie’s repertoire of puirt-a-beul and old Highland tunes is complemented by his understanding of the Gàidhlig song tradition which flavours his music. He plays with a distinct island style and can often be found at the crux of the Ceilidh or helm of the Horo- gheallaidh!

Nicky comes from rural Northumberland and found the route to Irish and Scottish traditional music through his home county’s rich musical heritage. With a passion for music and travel he has developed an interest in folk music from many of the countries he has visited and has experimented with influences from Europe, India and North Africa. As a guitarist and banjo player Nicky’s style is distinct with a particular focus on Irish tunes and plenty of groove. Nicky moved to the Isle of Uist to further develop his interest in traditional music and began performing alongside Jamie with Hebridean Folk band Eabhal. After years of performing together Jamie and Nicky have a unique musical dynamic rooted in their respective musical traditions.