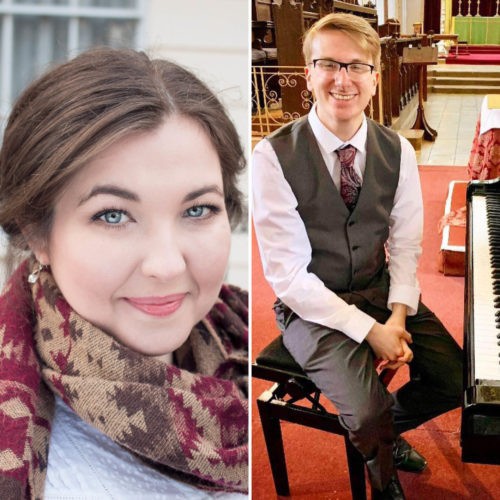 Amy Strachan (Soprano), and Daniel Peter Silcock (Piano), first began performing together through the music department of their secondary school, Peterhead Academy. After leaving school, Amy read music at the University of Edinburgh, receiving the Margaret Fletcher Schola Cantorum of Edinburgh Lieder Prize and the Donald Tovey Memorial Prize during her studies. She then continued her studies at the Royal Academy of Music, studying under the tutelage of Mary Nelson and Iain Ledingham. In 2019, Amy returned to Scotland to take up a place on the Alexander Gibson Opera School, at the Royal Conservatoire of Scotland, where Daniel has been continuing his studies on the MMus solo performance course in piano, after graduating with a first-class honours’ degree in 2018.

At the RCS, Daniel has studied under the tutelage of Aaron Shorr and James Willshire, and has become particularly associated with the music of Claude Debussy. Since re-uniting in Glasgow, Amy and Daniel have been able to strike up their musical collaboration again. Together they have given performances in a variety of different contexts, and in particular, have relished in devising programmes inspired by imaginative themes.

Their programmes have included classical pieces – from German lieder to operatic repertoire, songs from musicals, and jazz standards. They both also feel a special affinity with the Scots’ song repertoire. Amy and Daniel are both incredibly excited to give concerts as part of Live Music Now Scotland – and are looking forward to telling audiences new stories through music together.